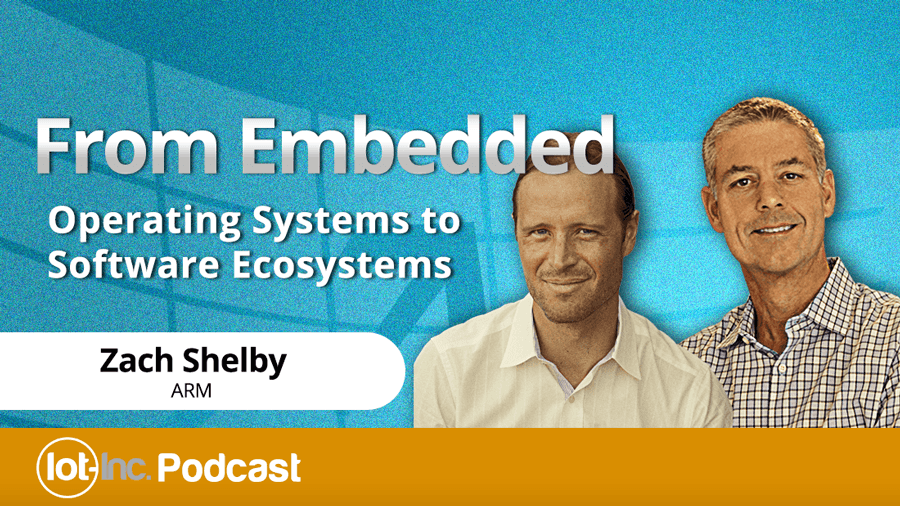 In broad strokes, the software required for an IoT deployment can be grouped into four classes: embedded software for sensors and gateways, networking or the IoT platform (communication, rules and sometimes interpretation) data management & analytics and of course the IoT application. In this episode of the IoT Inc Business Show, I discuss the first class, embedded software for sensors, or more specifically, sensor operating systems, with Zach Shelby and the inevitable evolution of these disparate classes into an IoT software ecosystem.

In this episode of the IoT Inc Business Show, I discuss sensor operating systems with Zach Shelby and the inevitable evolution of these disparate OS classes into an IoT software ecosystem.

Zach is VP of Marketing for Internet of Things at ARM – but don’t let that fool you – he’s a serious techie at heart. He’s worked on IoT standards, cofounded the start-up, SenSiNode (acquired by ARM), where he acted as CEO and CTO and has co-authored a book on 6LowPAN with Carsten Bormann.

Today a substantial amount of time and money goes into stitching together the four classes of IoT software into a single Internet of Things product or service. Furthermore the software is usually written to a specific set of hardware and cloud interfaces. Wouldn’t it be nice if there were IoT ecosystems, like Android and iOS in the mobile space? Zach believes the trend for 2015 is the IoT software ecosystems. Me, I’m not as sure it will come that quickly but I like the idea. Listen to this episode to understand the business ramifications of sensor software today and the implications of upcoming IoT ecosystems.

What sensor operating systems have you used? When do you think IoT software ecosystems will become usable or will that even happen?