What do you Mean by Standards in IoT? 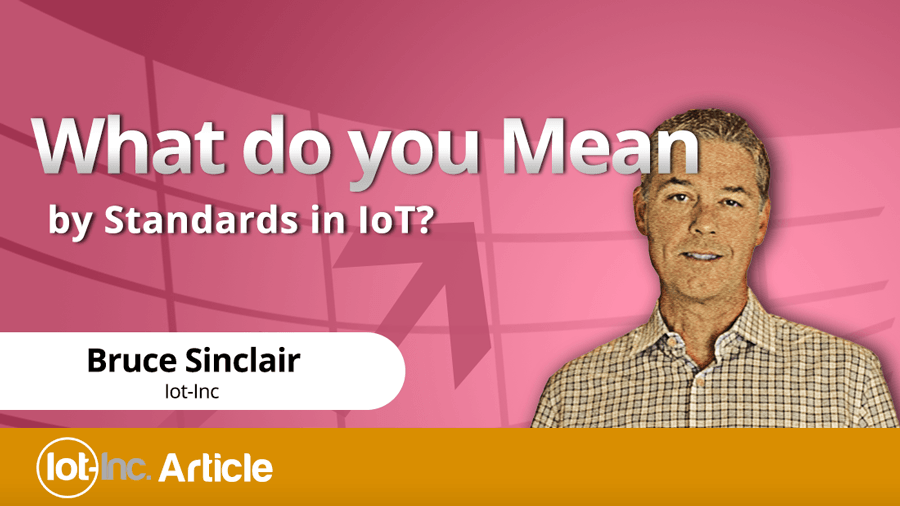 16 Jun What do you Mean by Standards in IoT?

On the first Thursday of each month I hold an IoT business meetup in the Silicon Valley. Because of the location presenting companies are generally Vendors or Analysts. They have been big: Intel, Gartner, GE, McKinsey, and small: Petzila, Plat.One, but always at the top of their game.

When people talk standards in IoT what they are really discussing are IoT protocols and when they talk protocols most people don’t realize there are three levels of IoT protocols.

A few meetings ago was no exception. Will Sobel from System Insights spoke about predictive analytics in manufacturing. An excellent presentation from a known leader in industrial analytics (download his presentation from here) but my take away was probably a little different than most.

When people talk standards in IoT what they are really discussing are IoT protocols and when they talk protocols most people don’t realize there are three levels of IoT protocols and hence three types of standards – each embedded within the next like Matryoshka Russian dolls.

The first is the media protocol. Although it can be Ethernet, it is usually one of the radio techs that you’ll recognize: Bluetooth, 802.15.4, Wi-Fi, cellular, LPWA. This layer organizes the data to be transmitted and received through the air. Within this radio layer we have the networking layer. Most of the OT world uses proprietary protocols such as Modbus and Profibus that have been developed for a specific industry, and all of the IT world uses IP, Internet Protocol, to organize the data for transport. Now it gets more interesting for business… Within the network layer is the application layer. Examples include MQTT, CoAP, Restful HTML and DDS. These protocols contextualize the data, identifying the data so it can be more easily and efficiently ingested and used by the application to be converted into useful information.

Will’s talk included the idea of a fourth layer of standardization. Although it is not a protocol yet, it is also a way to organize and standardize, in this case on the type of contextual information that should be captured. This is directly related to value creation and I will now be considering MTConnect for manufacturing and looking to see if there are similar information constructs in other industries for when I help my product companies define their information requirements

If you are interested in attending my meetups (online) join the meetup and you will always be notified.

Do you know of any similar contextual “standards” for other industries?