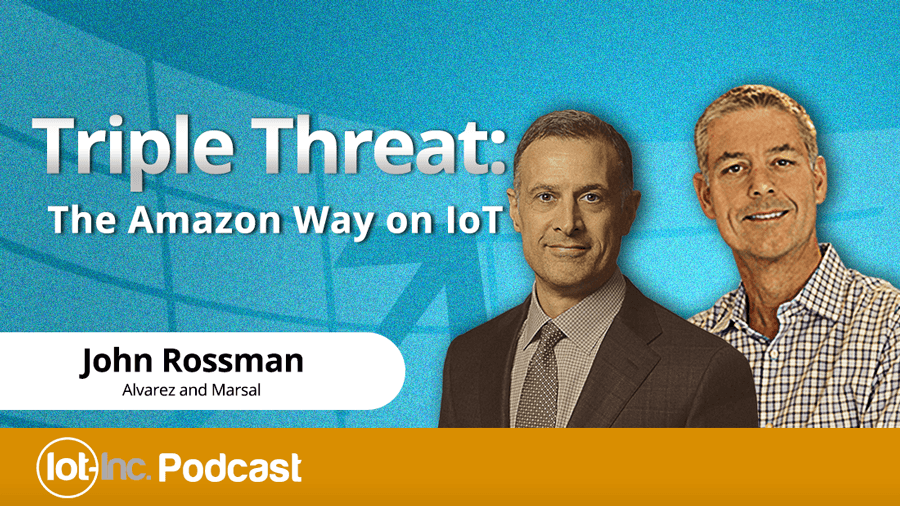 Although kind of a sleeper, you’ve got to admit that Amazon has been coming on to be a force to be reckoned with in IoT. From their lightweight Dash button to the Amazon Echo to their heavyweight AWS services for IoT, this is the year Amazon has blipped on the Internet of Things radar. In this episode of the IoT Business Show I speak with John Rossman about his book, The Amazon Way on IoT, and what we can learn from this relentless giant.

In this episode of the IoT Business Show, I speak with John Rossman about his book, The Amazon Way on IoT, and what we can learn from this relentless giant.

John is the author two books, including The Amazon Way on IoT, and is a Managing Director at Alvarez and Marsal, a professional services firm. Prior to A&M, John was an executive at Amazon.com where he launched and scaled the Amazon Marketplace.

John’s approach is to use his intimate knowledge of Amazon to uncover the lessons Amazon can teach us from their use of IoT to amplify their already innovative culture. Recent buzz has Amazon currently leading the way, ahead of Google, Apple and Samsung, to establish the leading connected home IoT Platform, the precursor to establishing the dominant Ecosystem. From product to platform to services, Amazon in embracing IoT relentlessly.

What’s your take on Amazon in IoT?