Why are Wearables Being Disbanded? Hint: Value 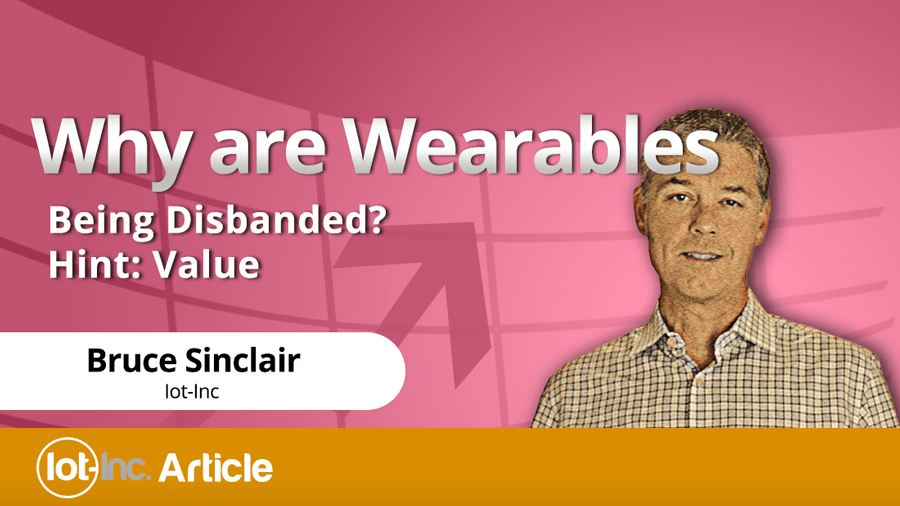 14 Sep Why are Wearables Being Disbanded? Hint: Value

I’m not a watch guy, or better put, I’m not a jewelry guy. The only thing exhibited on my body is a thin ring of gold and platinum bought 20 years ago that’s been there ever since. Before that, I wore a watch, not because it made me look better but because it had a killer app: telling time.

The value of wearables is not as a display device, but as a sensor array collecting data to quantify ourselves with analytics. We have replaced the utility of telling time with our phones so the new reason to wear a wearable will somehow come from the analysis of our metabolic and activity data.

It took me three or four months, but that watch, a nice Tissot, was unceremoniously transferred from my wrist to my top dresser drawer in 2007 where it has remained ever since. I couldn’t reconcile carrying both a wrist watch and a pocket watch. Unavailable in Canada at that time, I had to buy my iPhone 1 in NYC and get it “cracked” to work north of the border. Although the model numbers have changed over the years, I’ve had this watch in my pocket ever since.

And it’s not just me. I don’t explicitly look for these things, but I rarely notice someone wearing a watch any more, at least not in the U.S. Certainly not anyone under 20, which pretty much cements the watch’s future demise. Or does it? What about wearables?

Market data from PWC and Forrester suggests that one in five people are wearing, wearables?  Really?  Seems high to me since almost a third of these same people put them in their drawers with six months of purchase and that the market capitalization of Fitbit dropped from $10B to $2.8B in the 18 months after their public offering.

Let’s look at it from a value perspective. “All incremental value of an IoT product comes from transforming its data into useful information.” The value of wearables is not as a display device, but as a sensor array collecting data to quantify ourselves with analytics. We have replaced the utility of telling time with our phones so the new reason to wear a wearable will somehow come from the analysis of our metabolic and activity data. We’ve proven that how many steps we take or how well we’ve slept the night before only takes us so far. We need something more meaningful, something more life and death, like maybe something related to the epidemic problems of self-induced diabetes or heart disease?

I’m not sure what the new killer app will be but I do know if I start wearing a watch it will be because of utility again. The band around my wrist will be there only because it is the easiest way to attach sensors and if it also displays what’s also on my pocket watch, so be it.

Have you disbanded your wearable?