Overcoming the Massive Friction Slowing the Internet of Things

27 May Overcoming the Massive Friction Slowing the Internet of Things

The Internet of Things (IoT) is an information system connecting physical “things” to be interpreted and actuated to provide value. While simple in concept, implementation is anything but.

Friction will only be eased when robust markets form around IP to the last mile: when customers demand IP compatible components, buy IoT platforms that support IP from end-to-end and only join those alliances/consortiums/groups that are aligned with standardizing both information technology and operational technology on IP.

For any technology to get off the ground and reach escape velocity the economics must work, and the Internet of Things is no different. Looking back in IoT history we see the result of Darwinian forces — a litany of custom and closed deployments, each having evolved for a single and unique purpose.

Outlooks that peg the IoT opportunity in the trillions of dollars with billions of sensors deployed are conveniently ignoring the massive friction of complexity and inefficiency holding back the market. The calculus of today’s hyped projections apply the current growth rates, fueled by early adopters, to the much larger mainstream market. This is flawed. These rates of growth won’t be sustained by the bulk of the market without reducing the friction caused by the customized fortresses and closed silos that still characterize most of the tech today.

Stating the Internet of Things needs to be standardized is too simplistic. Peeling back the layers of IoT exposes the middle layer or network layer, as where standardization must occur.

To realize its potential, the Internet of Things must seamlessly link information technology (IT) and operational technology (OT) by extending the Internet Protocol (IP) all the way to the end devices that are the things of IoT.

Before the Internet of Things had a Name

Even before the Internet of Things had a name it was evolving separately in different industries solving different problems. Each network’s technology, whether for a consumer home automation system or an industrial SCADA (Supervisory Control and Data Acquisition) system or a commercial telematics system, followed its own evolutionary path. Some of this operational technology was made pseudo-open but most was kept closed and propriety to gain competitive advantage. This lead to highly customized components and siloed systems. 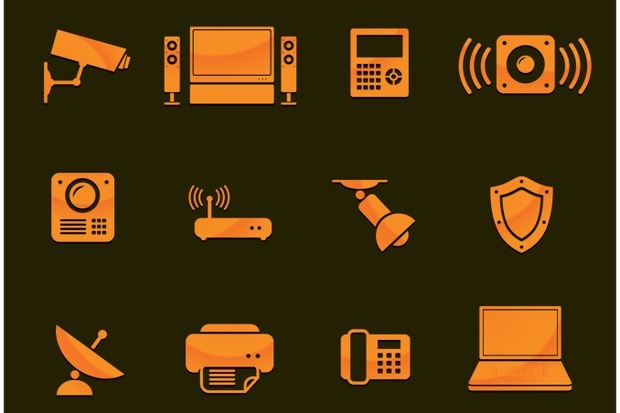 The fact is, launching an IoT deployment today is expensive and not for the technical faint of heart.

Expensive because a majority of hardware and software at the “ragged” edge is custom-made rather than purchased off-the-shelf. But more expensive than custom components is custom integration. All deployments, save the most trivial, require system integrators to connect the dots. Why? Because IoT edge networks are a patchwork of disparate components and proprietary network interfaces.

The infamous Internet of Things silos aim to simplify this. Integration costs go down while system harmony goes up but the price paid at this one-stop shop is vendor lock-in. A customer deploying a closed system handcuffs their rate of innovation to that of their supplier’s. And considering IoT deployments are constantly evolving, especially during their early stages, such Faustian deals reduce company agility and flexibility, constraining their innovation and increasing reaction time to competitive pressures.

The Internet of Things transcends the siloed approach used in M2M and early automation by being part of, well, the Internet. To connect any closed network to the open Internet requires the use of “translators” and whenever translation is involved, trouble isn’t too far behind. Not only do they add an unwelcomed layer of complexity and unreliability, they don’t scale -– whether as local hardware devices or as a service in the cloud.

The higher costs of custom or closed systems lead to a smaller market of buyers which leads to less competition and supply which, in turn, leads back to higher costs. Economies of scale will allude the IoT industry until IP is employed to standardized the network backbone spanning the sensor and analytics app.

Developing this central tech is formidable since IoT networking requirements vary so widely. A low-cost battery-powered temperature sensor communicating a 12-byte reading once a day over a lossy wireless network has very different networking needs than a complex bridge sensor array communicating a deep set of data in near real time.

Given the wide range of use-cases, is it practical to standardize on a single networking technology?

Well, it’s complicated. Networking is layered to provide maximum flexibility and scale and it’s in these layers of the “network stack” where all the action occurs and more importantly, where standardization must happen. Let’s do a deep dive to see how this works.

The purpose of networking in IoT is to transport the physical world data from the sensor, that’s on/in the thing, to an app or service for analysis. Code on the connected sensor formats the data, packages it for transport and sends it on to the receiver gateway as a radio wave where the packaging and data is reconstructed and sent on the network for delivery. 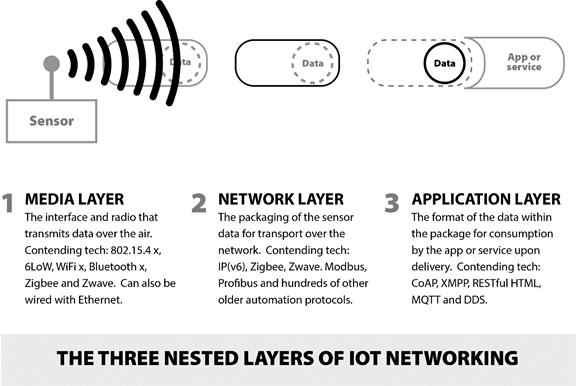 Open standards applied to IoT networking will ease the friction caused by custom and closed IoT ecosystems. However it’s neither pragmatic nor advisable to apply standards to all three layers of networking.

Contending technologies in both the media and application layers are differentiated by the functionality they support. Different physical environments demand different radio wave characteristics and different application data flow architectures require different protocols. Although there’s room for consolidation, these layers should not be the top priority –- that honor goes to the network layer.

The network layer does one thing: transport data. And since it extends from sensor to app, it can directly influence the development of IoT radios and IoT applications. Standardizing at this layer delivers the most immediate and broadest benefits.

Networking from the cloud to the gateway has already standardized on IP but from the gateway to the sensor — the so called last mile — it’s no-holds-barred. It is on this bleeding edge that we find the dying protocols of days gone past: Zigbee, Zwave, Modbus, Profibus and other old automation protocols. To have an Internet of Things, IP must reach out all the way to the thing, establishing an end-to-end connection, eliminating all translation in its path.

Meet the New Boss – Same as the Old Boss

The Internet of Things must be based on the same underlying networking tech as the Internet of People that has reliably served us for over 20 years. Standardizing on IP will nourish a new market of standardized components. Selection will be greater and costs will be lower, fueling innovation with efficiency.

In addition to knocking down silos, the Internet Protocol also carries along with it other important advantages:

But things aren’t perfect. Conspiring against IP is its power requirements, memory size and resilience in unreliable networks. IP has proven itself on high-powered, fast networks, but many IoT deployments are built upon low-power, lossy networks. We know IP can scale up, but can it scale down?

IP(v6) can be made to operate over any radio and work with any application layer. For example, like DSL for telephone lines, 6LoWPAN and more recently 6TiSCH were created to make IPv6 operate efficiently over IEEE 802.15.4 radios – the most widely used in IoT. Also supporting the rise of IP is RPL, a routing protocol for constrained node networks and CoAP, an application layer protocol that enables web services for even the most constrained devices and networks.

With few exceptions, today’s Internet of Things is based upon custom-built fortresses cemented together by custom code or closed silos of proprietary tech, both buckling under the weight of innovation. Don’t buy into a fortress or silo — they are on the wrong side of history. And if you are trapped inside, plan your escape by refreshing your way out with IP, the Internet Protocol.

Friction will only be eased when robust markets form around IP to the last mile: when customers demand IP compatible components, buy IoT platforms that support IP from end-to-end and only join those alliances/consortiums/groups that are aligned with standardizing both information technology and operational technology on IP.

Change to an open and standardized IoT will happen — one deployment at a time. The speed in which it happens depends on you.