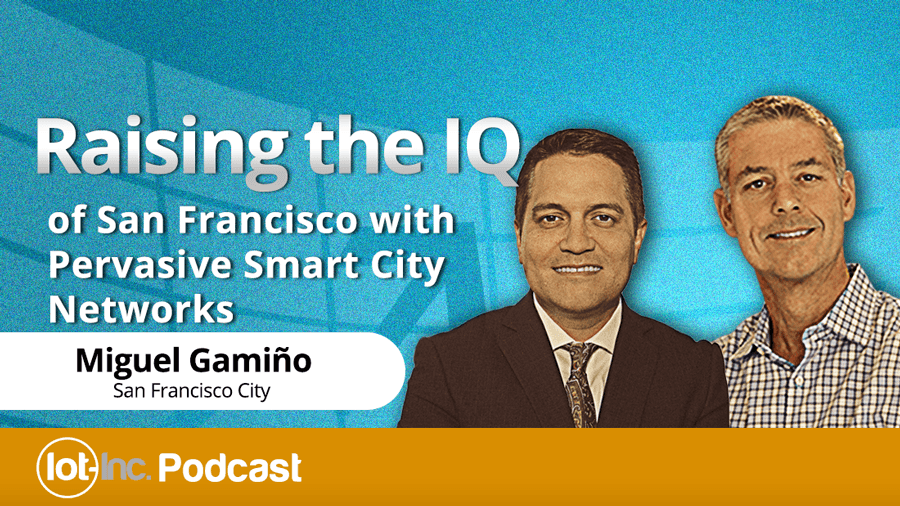 What’s the IQ of your city? There are a few ways to raise it to become a smart city. The bottom-up approach starts with a few IoT pilots to see what sticks and what the operational implications are. The top-down approach looks at the city as a platform providing interconnectivity. In this episode of the IoT Business Show I speak with Miguel Gamiño, San Francisco’s CIO, about his approach to make his city the smartest of them all.

In this episode of the IoT Business Show, I speak with Miguel Gamiño, San Francisco’s CIO, about his approach to make his city the smartest of them all.

Miguel serves the City and County of San Francisco as its Chief Information Officer and Executive Director of the Department of Technology. As San Francisco’s CIO, Miguel provides thought leadership and the strategic direction for San Francisco’s use of technology, including IoT.

San Francisco is taking a multi-tiered approach and at its smart city foundation is connectivity. SF WiFi everywhere and now LPWA everywhere through a recent partnership with Sigfox. Although you learn a lot by standing up individual pilots, that’s not the endgame. The endgame is to have pilots that can talk to each other. This requires a middle layer of services from each city department that can talk to each other, and a top layer consisting of applications. Where the smart city killer app will come from is anybody’s guess, but it won’t emerge from an isolated vertical. It will be in some cross matrix form across these smart city layers that we can’t even conceive of yet. San Francisco is playing the long game, building its IoT strategy top-down from the ground up.

Which smart city has the highest IQ?