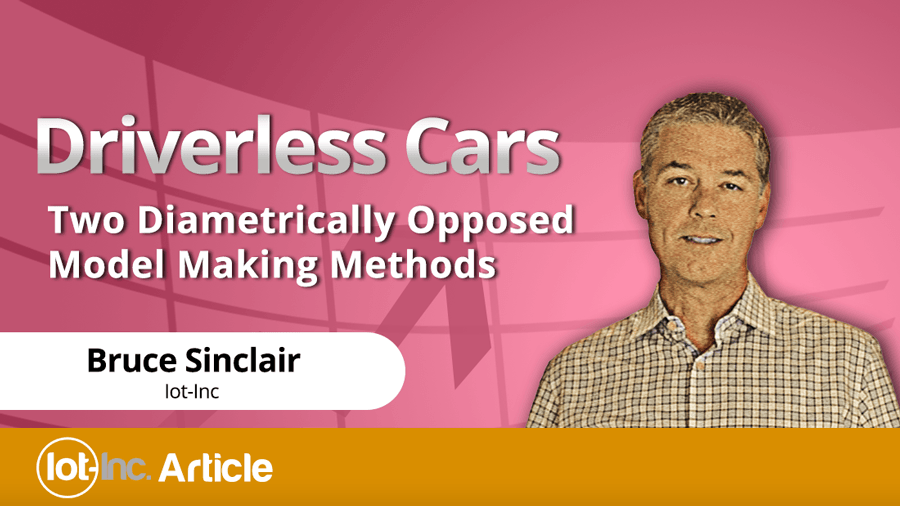 While presenting at a VC event a few weeks back I asked the audience of about 50 VCs, bankers and lawyers how many people, like me, would be early adopters of driverless cars. Maybe it was the crowd but given the US government’s recent projection that 90% of traffic fatalities can be eliminated by autonomous vehicles by mid century, I was surprised that only 7 or 8 people (under 20%) raised their hands.

I’m fascinated by the two diametrically opposed approaches the companies are taking to develop their respective driving models.

Google’s driverless car and the Tesla Model S are examples of IoT products. And my question came up when I was discussing the IoT business model continuum for which I often use the Tesla as one of the examples. Sold as a regular product today (business model stage 1), Tesla will likely evolve its business model over time.

I’m fascinated by the two diametrically opposed approaches the companies are taking to develop their respective driving models. Google has taken a bottom-up approach to developing its algorithms – meticulously iterating on its decision making rules during each of the million+ miles their cars have been driven. On the other hand, Tesla’s top-down approach started with a much simpler model that was turned on with an over the air update. Taking advantage of its large install base, the company is quickly refining its model by using machine learning to interpret the overriding actions of its human teachers while in semi autonomous mode.

Both approaches work but the jury is still out on which company will be the first to deliver on the promise of driverless cars but whoever it is, you can be sure that I’ll be one of their first customers.

Will you be an early or late adopter for driverless cars?