Putting Business First in the Internet of Things

09 Sep Putting Business First in the Internet of Things

Do you remember your first experience using the Internet?

As a university student I worked part-time in a cranio-facial research lab programming for a little extracurricular cash. Visiting researchers from around the globe would come and go but over the six months he was measuring and experimenting with force vectors on the jaw, I struck up a friendship with an unusually tall visiting Associate Professor from a small prefecture outside of Osaka, Japan. Kenji Takemoto and I shared a sense of humor and an interest in using 3D animation to visualize data.

On a typically rainy day I made my way across campus to the lab and slouched in front of my HP graphics workstation. Waiting for me was my very first email. It was from Kenji, who had returned home just the week before.

I was amazed. A message from half way across the world, and it was free!

The early Internet started by making connections between people and in doing so, changed everything.

First Encounter with the Internet of Things

Fast forward 25 years and go back six and this time it was me who was in Japan. As CEO and acting head of sales, I was demonstrating our start-up’s smart home IoT Platform to the country’s second largest ISP by flicking my thumb within the browser of my iPhone 1.

I turned lights on and off in my company’s Canadian office halfway around the world and KDDI was amazed.

Some are seduced by shiny things and others by shiny numbers; whatever your tastes, the Internet of Things has it all.

The hype surrounding IoT hasn’t even reached its peak, but none the less, it’s impressive: 50 billion connected devices and a market opportunity of $7.1 trillion by 2020. What’s not to love? Considering last year’s global GDP was around $74 trillion, these numbers are certainly big enough, but are they meaningful?

A dirty little secret behind projections like these is, the thousand-row spreadsheets upon which they’re based, pivot on just a handful of assumption variables that are rarely made public yet are just that… assumptions. Modify these variables, just a little, and the projections change wildly. Assumptions are then reverse-engineered to tweak projections and in the rare case when they’re are made known, it’s just as easy to justify an assumption of “3.5,” for example, as it is to justify a “3.2.”

Where and How much is Being Spent

To date, a majority of the analysis on the Internet of Things has focused on the return from new revenue opportunities, increased efficiency and better decision making. But at what cost? If, for example, a 1% reduction in Healthcare system inefficiency results in a $63B savings over 15 years (as GE estimates) then what’s the investment required to generate that return?

Although taxonomy can differ, IoT investment can be roughly blocked into three areas: sensors, networking and apps.

Quantifying the required investment yields a full spectrum. As Roberto De La Mora, Sr. Director, IoT Products and Solutions Marketing at Cisco puts it, “I have never seen two projects that are not only the same, but even similar in scope or size.”

From less than a thousand dollars for Retail IoT to over a million dollars for Infrastructure IoT, the investment can be lofty but luckily it doesn’t start out that way. 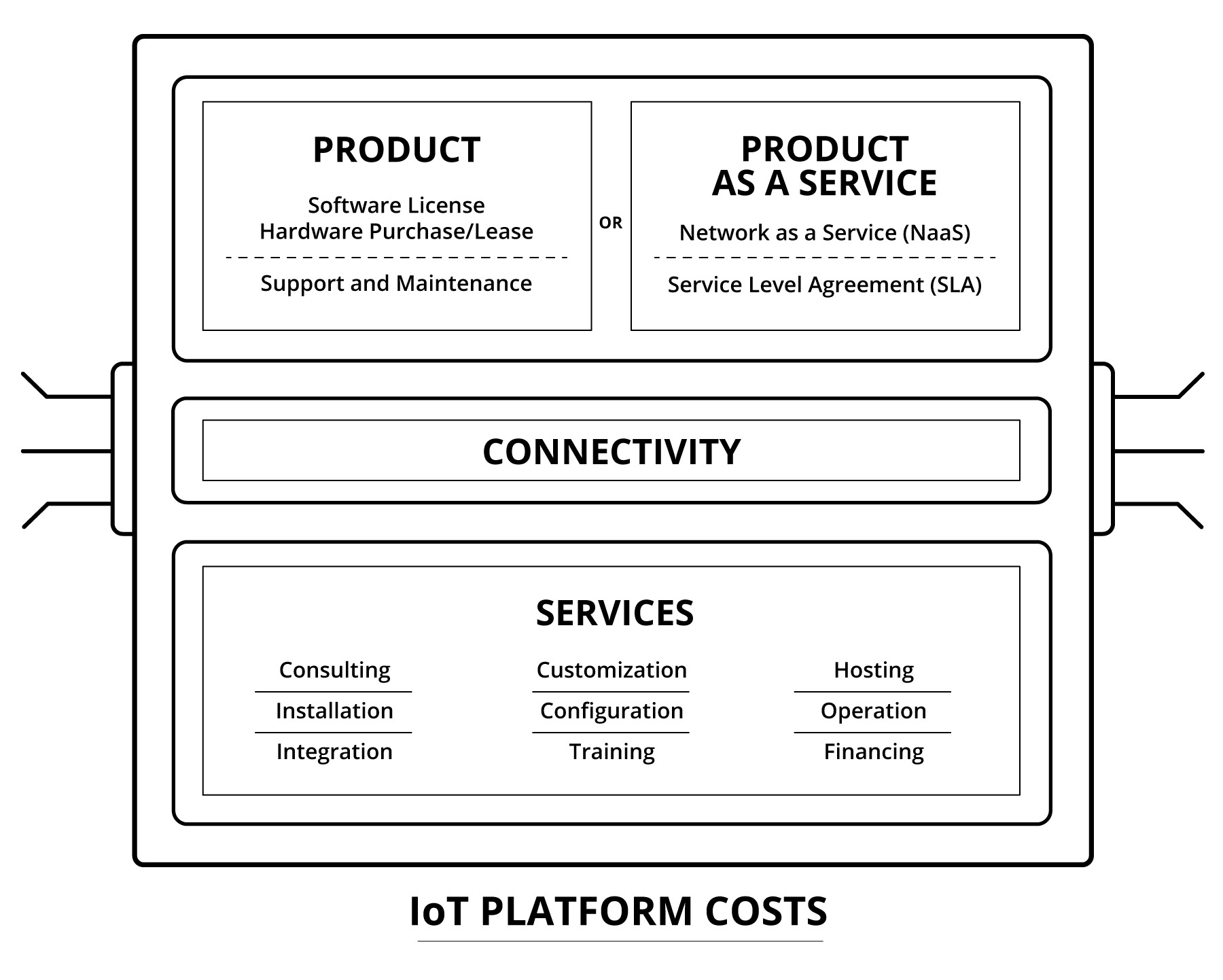 “The initial proof-of-concept investment is usually very small. Says Steve Jennis, SVP Corporate Development, PrismTech. “Once a successful evaluation/prototype moves on to a first commercial deployment, our customers will typically spend $50K – $150K. Subsequent projects can range up to $1M+ for very large systems”. Since cost is proportional to the size of the deployment, business can throttle their investment until they tune their business models to achieve a satisfactory ROI.

At the heart of every IoT investment is the product category known as the IoT Platform.

To demonstrate our smart home IoT Platform, we built a demonstration lab, affectionately known as the “Spooky Room” within one of the few windowless offices within our 9th floor Montreal headquarters. Spooky because at any time of day or night, lights would mysteriously turn on and off, the fan, stunt doubling for an air conditioner, would randomly start billowing its attached ribbons, and the desktop computer would light up and begin operating at will. This frightened anyone who happened to be walking by at the same moment a salesperson, in some other time zone, was amazing someone else.

Today’s IoT Platforms are far more developed and robust but the fundamentals are the same. The IoT Platform handles networking — bridging the physical and virtual worlds and it’s the place to start when analysing the economics of IoT deployment.

With the exception of Retail IoT, which includes wearables, consumer goods and smart home products, most IoT Platforms are bought rather than built in-house. And at this stage of the evolution in IoT, most of these platforms are not bought from the Vendors directly but rather from System Integrators and various forms of Value Added Resellers that help things along the way.

“Our customers in the IoT market do not buy components,“ confirms De La Mora of Cisco, “they buy solutions tied to business outcomes and results.”

The first and most impactful financial decision is about the network infrastructure. Buy or rent? Financing is available to purchase the capital equipment but an increasingly more popular option is to side step the infrastructure altogether by buying it as a service. Although it costs more in the long term, the benefits include a lowered cost barrier to entry and the ability to move these costs off the balance sheet and on to the P&L.

The cost model for a Network as a Service (NaaS) is based on monthly data usage (market price is $10 per MB for processing or storage) or the number of “Things” in the network (market CPM is $30 – $75 depending on volume and SLA).

Bryan Kester, CEO of SeeControl explains, “We charge a pay-per-use fee for our cloud service based on data received, analyzed and stored from IoT devices and systems. For a lower fee we will analyze raw data in real time and only store the results.”

Other upfront costs are the optional services used to get the deployment up and running: consulting, installation, integration, customization, configuration and training.

“Integration is key as data analytics should not be hosted separately from the rest of the corporation’s business intelligence, “ states Niall Murphy, Founder & CEO, Evrythng. “We provide setup professional services as required for enterprise system integration (e.g. CRM or ERP system integration.”

If infrastructure is purchased then ongoing costs include possible financing (market rate is %), support and maintenance fees (market annual rate is 20% of purchase price) and Internet connectivity (market monthly rate starts at $1 per “Thing” for low data rates and increases quickly with bandwidth requirements).

By definition the NaaS model includes support fees in the form of a negotiated SLA (Service Level Agreement) and connectivity.

A hybrid approach is also sometimes employed, as explained by Raj Vaswani, CTO and Co-Founder of Silver Spring Networks, “We have flexible models based on our customers’ needs. In most of our subscription-based services, customers purchase network infrastructure up front, and then pay ongoing service fees for network management, software hosting and management, and field services.”

The early Internet of Things started by making connections between people and things and like the Internet of people before it, it too, will change everything. If you haven’t had your first IoT experience, you will, and you’ll never forget it either.

But, however amazing the bling of the tech or the perceived size of the opportunity are, it’s the business of the Internet of Things must first make sense and its business that must get out in front of the hype, otherwise we run the risk of technology or marketing being the tail that wags the Internet of Things.

This article was originally published on September 9, 2014: http://www.forbes.com/sites/ciocentral/2014/09/09/putting-business-first-in-the-internet-of-things/